It all started with a humble warehouse worker’s broken down truck. And there’s no telling where it may end. But there are already some valuable lessons to be learned from engagement from Ocean Spray on TikTok for how brands can effectively ride a viral wave.

If you haven’t already seen the clip that started a viral trend that dominated the early days of October, here it is.

In the clip we see 37-year-old Nathan Apodaca cruising down the road on his skateboard swigging from a bottle of Ocean Spray cranberry juice while Fleetwood Mac’s “Dreams” plays in the background. A few seconds in, Apodaca (known on TikTok as @420doggface208) lipsyncs a couple of the lines from the song.

Fast forward a few days and Apodaca’s video had racked up tens of millions of views and spawned dozens of copycat videos. Fleetwood Mac’s “Dreams” had rocketed back up the charts four decades after it was released. Apodaca was on CNN. Ocean Spray juice was flying off the shelves and the stock price had nearly doubled. 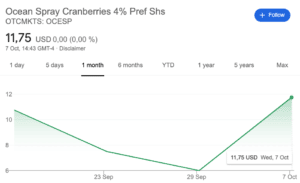 As with many viral trends, it’s hard to predict exactly what piece of user-generated-content will have the magic mix of elements and timing to propel it to viral frame.

Christina Ferzli, Ocean Spray’s director of global corporate affairs, has a theory of her own for why Apodaca’s video worked so well.

“It struck a chord,” she told The Drum. “Just the fact he was making the best of a situation despite a challenge really resonated with people. There is such a calm and positive energy to the video and given 2020 is an especially challenging year, it was just so welcome.”

While it’s still too early to know exactly how long Ocean Spray will ride the viral wave and where it will take them, there are already a number of useful takeaways for brands hoping to hop on a way of their own.

Imagine if Ocean Spray hadn’t been monitoring TikTok? As the platform is still relatively new and considered controversial by some, it’s possible the marketing team may have missed that a video featuring its product was trending on the platform. But thanks to a plugged-in marketing team, Ocean Spray was able to catch the wave early.

The second smart move by Ocean Spray was to play it cool once they learned their cranberry juice had a supporting role in Apodaca’s viral video. The speed of social media can prompt brands to want to react too quickly, inadvertently smothering the organic nature of a viral hit and risking a backlash. But rather than immediately engage, Ocean Spray waited a few days to see how the trend developed and calibrate how it could participate, according to Ferzli.

So what did Ocean Spray do? Something simple: they shared. This gave Apodaca’s unexpected hit exposure on their own Instagram channel (at that point there wasn’t even a presence for Ocean Spray on TikTok). Ocean Spray chose to engage, but more as fans rather than a coach. They didn’t want to control the unfolding narrative; rather, they too wanted to ride the wave.

Imitate, but keep it personal

Next, it was Ocean Spray CEO Tom Hayes’ turn to get into the act. He created a TikTok account for the sole purpose of posting a copycat video joining an emerging trend that had already swept up Mick Fleetwood. A video of the CEO lip synching on a skateboard posted to his own channel was a great way for Hayes to show he was embracing the trend on a personal level – and giving his marketing more fun content to share.

Ocean Spray’s Ferzli summed up the company’s instincts best: “Our first reaction was that we wanted to help him.” That help came in the form of a cranberry-coloured pick-up stacked high with Ocean Spray juice. The reciprocal (and creative) gesture to repay Apodaca for the untold value of the publicity that he had generated helped Ocean Spray extend the feel-good vibe of the original video further. The moment was also widely covered by news outlets, amplifying Apodaca’s celebrity status (and Ocean Spray’s brand) beyond social media to traditional media.

We loved the skateboard, but thought this set of wheels had a better sound system… Enjoy @doggface208! #dreamschallenge #cranberrydreams

Yes, Ocean Spray orchestrated a publicity stunt. And they managed to get Ocean Spray on TikTok with a channel for the brand and the CEO. But since then, they’ve toned down their involvement. They’re not trying too hard. No more publicity stunts have taken place. And that new TikTok channel still has only one video: a copycat compilation video that includes sequences from dozens of videos that emerged in the two weeks following @420doggface208’s original (which has more than 50 million at the time of writing).

In other words, they rode the wave – and perhaps helped extend its lifespan – but were also content to return to their old habits (although that doesn’t stop them from commenting on new videos from Apodaca.

And who knows, Apodaca’s “celebrity status” (helped along by Ocean Spray) may give rise to more collaborative opportunities (planned or unplanned). And it probably won’t be long before other enterprising TikTokers (or savvy brands) will connect to produce more organic, feel-good moments that create huge brand dividends for relatively little investment.

It may not be possible to predict viral opportunities. But Ocean Spray has shown that brands with the right tools and approach can react, engage, and catch the next viral wave that rolls their way out of the blue.